- what we’ll discover when this NFT art project is over. By Jo Adetunji

English artist Damien Hirst’s latest project, “The Currency”, is an artwork in two forms. Its physical form is 10,000 unique hand-painted A4 sheets covered in colourful dots. In the same way as paper money, each sheet includes a holographic image of Hirst, a signature, a microdot and – in place of a serial number – a small individual message.

The second part of the artwork is that each of these hand-painted sheets has a corresponding NFT (non-fungible token). NFTs are digital certificates of ownership which exist on the secure online ledgers that are known as blockchains.

The way that “The Currency” works is that collectors will not be buying the physical artwork immediately. Instead, they will pay US$2,000 (£1,458) for the NFT and then have a year to decide whether they want the digital or the physical version. Once the collector selects one, the other will be destroyed.

So what is going on here, and what does it tell us about art and money? 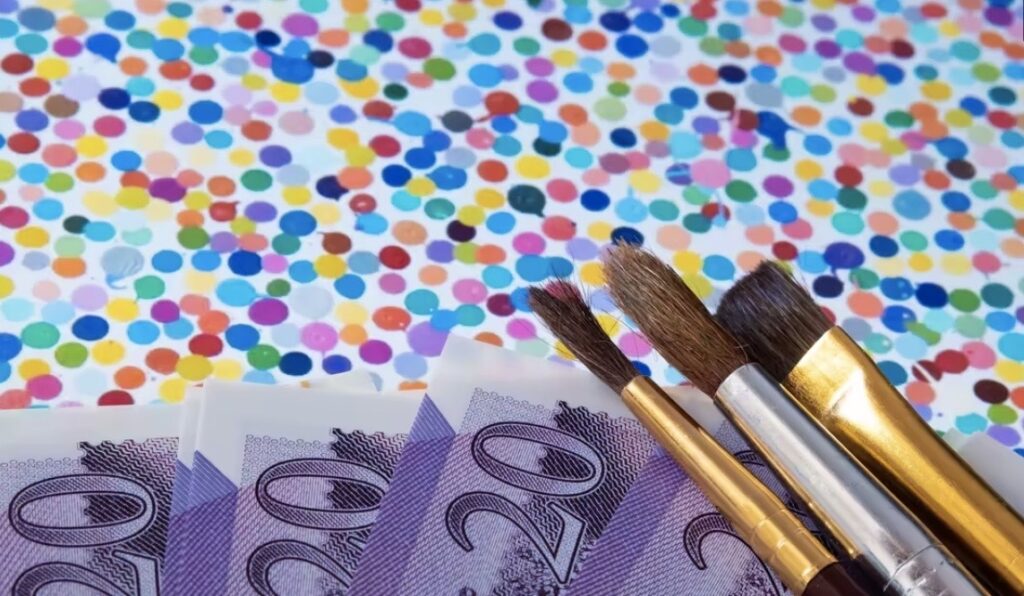 Hirst has essentially created a variety of money, on the rationale that money is primarily a social phenomenon built around faith and trust. In doing so, he touches on an interesting paradox. “Non-fungible” means that a token is a once-off. This is to contrast it with fungible items like dollars, which are all the same and can be traded like-for-like – the same way as many cryptocurrencies such as ether or dogecoin. Fungibility is one of the essential properties of any currency according to traditional economics.

But is it what it seems? By creating 10,000 individual units that mimic real currencies, Hirst is highlighting with the unique markings of each work that even fungible currencies have some non-fungible properties – for example, most currencies will have different serial numbers and issue dates on each note. This helps to underline that money is a concept that becomes ever harder to pin down when you look at it more closely.

The work further contests our sense of what money is by raising questions about another of its essential properties – that of a medium of exchange. A work by a famous artist would rarely be thought of as a medium of exchange. Instead, it would normally be treated as a scarce store of value, like gold.

Hirst is asking if it really has to be this way. By producing 10,000 works in the style of a currency, he is clearly having fun by showing how money is malleable and can shapeshift depending on the context.

What matters most, physical or digital art? Hirst is not the first to ask this question in the context of NFTs. A few months ago, a company called Injective Protocol bought a 2006 work by Banksy called Morons, which satirises an art auction, for US$95,000. It then burned the piece live on Twitter so that only a digital version survived on an NFT. It then sold the NFT for US$380,000.

I have previously discussed how the people at Injective had cleverly decided to play on our preference for the physical over the digital. By destroying the physical version and then claiming the NFT signature would stand in for the artwork, it drew attention to the benefit that an NFT cannot be destroyed by vandals such as themselves.

At a time when there had been an explosion in demand for NFT art and other collectibles, with some trading hands for millions of pounds, this was a comment on the persistent question concerning whether NFTs really imply ownership. For many, the puzzle is why someone would feel that owning a digital version rather than an “actual” artwork constitutes ownership at all.

Clearly, Hirst gets it. He is approaching the question of ownership by distilling it down to its purest economic and commercial form – literally the artwork as money. When people express puzzlement at NFTs, really what they mean is how can you spend money on something so valueless? The idea that digital ownership is equivalent to physical ownership is still unacceptable to the majority of people.

What Hirst is highlighting is how the “puzzle” is easily solved by recognising that there are two communities interested in his artwork: those who value his traditional physical pieces and those who value his NFT pieces. He does this, I think, to show how value never makes sense when it is removed from the cultural community that has ascribed that value to it. Each community is a mystery to the other. Zoom out, however, and they are closer than they imagine, ultimately bonding as fans of Hirst.

For most people, the puzzle is still the NFT community. This culture is populated by passionate blockchain enthusiasts and crypto-natives, young people who grew up with cryptocurrencies. For them, a blockchain wallet stores their value. This can mean fungible currencies like bitcoin or ether, but also, more and more, their art collection. These collections represent their tastes and interests and tell us a little about who they are, and what they value.

A particularly clear-cut example of this would be someone who, after the year has passed, decides to claim the NFT of Hirst’s work and reject the physical version. What better move to signal commitment to a blockchain future? When the year is up and we see how many people chose to keep the NFT, it might even give an interesting indication of to what extent this new digital generation is becoming the dominant one.