New currencies are being used in Spain to boost local business

About 200 forms of payment are being used in different parts of the country, and the city of Barcelona will be adopting the system in 2019.

They are not legal tender, but they arrived on the scene with the idea of making society fairer and, although there are no official figures, it seems there are about 200 of them all over the country. They are the ‘local’ or ‘social’ currencies, an alternative payment method to the euro or even a complementary one.

This week the mayor of Barcelona, Ada Colau, announced that she plans to fulfil her election pledge to introduce one in the city. After a pilot scheme, it will be implemented definitively in 2019. So far, it is not known whether this will be a virtual or physical currency, what it will be called or how it will be used, although the mayor has indicated that it could be used to pay grants or micro-loans, part of civil servants’ salaries or pay suppliers’ invoices. Her objective, however, is clear: “To support local business and ensure that wealth and employment stay in the city.”

Another town in Catalonia, Santa Coloma de Gramenet, is already preparing a similar currency which will come into circulation next year “to channel public spending”. Again, the objective is to boost local business and develop a more social society.

To involve local people, the council has started a campaign to name the currency: the winner will receive a cheque equivalent to 500 euros to spend in businesses which are taking part in the project. What is unusual is that this town has received a grant of just over 130,000 euros from the EU to set up this complementary payment system.

The small and medium business association of Catalonia, Pimec, is sceptical about these projects. “We’re not against them, because anything that helps local business is good, but we don’t see them as anything wonderful,” explains Álex Goñi, the president of Pimec Comercio. He is also concerned about the legality of civil servants having to receive part of their salary in this form.

In fact, dozens of local currencies are being used in Spain, although with less administrative support than in these two cases. Usually, they are not physical money; they function in the form of books in which the ‘income’ and ‘expenditure’ is noted.

The oldest is the ‘zoquito’, which has been used in Jerez de la Frontera for nearly a decade. It was the idea of a young Japanese woman who lived in the city and knew of similar schemes in her own country.

“It began in 2007 but wasn’t due to the crisis. It has an ideological value which can help to improve society,” says Javier Saborido, the coordinator of the national conference on local money which will take place in Jerez next year. At present this virtual money has about 80 to 90 users, although as many as 200 people have used it. It is equal to one euro, but those behind the scheme prefer to say it is equivalent to a cup of coffee.

The most popular local money is to be found in Catalonia, in Gerona, where the ‘res’, which was created nearly 20 years ago in Belgium, began to be used in 2012. It is currently used by more than 500 shops and around 1,000 users. In the town of Vilanova i la Geltrú, another initiative is used by 350 people and 35 shops. It is called the ‘turuta’, and began in 2010 at the request of a group of local residents. The ‘henar’, the money which began in Alcalá de Henares last year, already has an app and 200 users, and in the Basque Country, there are local currencies such as the ‘ekhi’ and ‘txantxi’.

Elsewhere in Spain, it is possible to find ‘arquitos’, ‘oliva’, ‘chavico’, el ‘camaleón’, ‘espronceda’, ‘salero’, ‘mora’, and ‘canicarana’. They are initiatives on a smaller scale, but are proving increasingly popular.

From the Information Age…

Then in the 1980s, we entered the information age. In 1981, the IBM XT computer was released to the public. Michael Linton from Vancouver Island, Canada, who formerly worked in the computer field in the 1970s, built an accounting database. In 1982, the Local Exchange Trading System was introduced, and laid the foundation for a Mutual Credit community currency system. Whereas local currency systems developed as a natural response to economic crises in the dominant economy, the LETS developed as an intentional response to a critique of theconventional economy, and was designed to be in contrast to it. In designing the LETS, Linton sought to separate the contradictory role of conventional money as a store of value and a medium of exchange into separate parts. He saw money as “an information system for recording human effort”, and saw no difference between money mediating an exchange, and inches mediating the length of a piece of wood. Using the analogy of a home builder, what if the home builder were to go to the Building Supply Store, only to be told that he could not have any wood because there were not enough inches to measure them with? If the materials and human resources are in place, why do we accept that there is not enough money to move them? Money, then is simply information and need not also represent a store of value at the same time. Thus, as all information could be kept on the computer, it did not have to be printed on paper in the form of a note. If money is simply information, then it need never be scarce. That’s not to say that the supply is unlimited, it certain is limited by various realities. However, it is always there when needed. The responsibility for maintaining the value of the money was given to the person who issued it. Thus, LETS currency is identified as “personal money”

Rather than seeing the LETS as an alternative, Linton saw the LETS as a parallel economy, like a lever for switching the train track of the conventional economy towards a better destination. Understanding that market mechanisms are efficient, and that efficiency is often a good thing, he sought to introduce cooperativism into market–oriented economic activity. As the LETS system was simply recording the transactions and keeping the accounts, and was not actually issuing the currency or controlling it in any way, Linton designed the system to be interest–free. In that way, the member was responsible for their use of the system, and the system simply facilitated that use. The fact that the LETS currency is always sufficient in supply, that it remains within the locality or community into which it is issued, that it is issued by the members themselves and that no-interest is charged on it, it complements perfectly what the conventional economy is lacking. In Toronto, a unique approach to non-profit organization fundraising is paying off big dividends. The Toronto Dollar is a currency that circulate, for its test period, within the St. Lawrence Market. People can increase their contribution to non-profits by exchanging their Canadian Dollars for Toronto Dollars. Businesses in the market accept Toronto Dollars and can cash them in for 90% of their value, effectively giving 10% of their sales to non-profit organizations. Plus, the Toronto Dollar has an expiry date, and thus any other Toronto Dollars that were not spent mean a full contribution to the non-profit organizations.

...To the Global South In 1994, the Tianguis Tlaloc, the first modern–style community currency system was started in the Mezquital Valley in Mexico’s Oaxaca state. Although it came at the same time as the Zapatista Rebellion in neighbouring Chiapas and had to be continued, the program was restarted in Mexico City in 1995 and has been spreading throughout the country since. The state government of Tlaxcala has become involved to support the program as a poverty alleviation measure. In 1995, a group of Argentinian environmentalists held a backyard garage sale. However, this was no ordinary flea market. Each person brought what they had to sell, and received tickets representing money. They used these tickets to mediate barter exchange, and was a great success. The Global Exchange Network (RGT) blossomed, and has now spread nationwide to become the largest national community currency network in the world, with 500 systems, 500,000 members and several million US dollars in circulation each year. The national government has recently signed an agreement with the Global Exchange Network to facilitate a cooperative relationship.

A number of Argentina’s Provinces also had experience with issuing their own currency. When the national government was unable to transfer funds to the provinces, they had no money to pay their employees with. So, rather than waiting, they issued their own “Debt–Cancelling Bonds”, government bonds issued in the form of currency units equivalent to the Argentine Peso. Economic research showed that when these currencies circulated, inflation in these provinces actually declined, compared to other areas in Argentina. The Global Exchange Network model is now spreading throughout South and Central America, with systems in Uruguay, Brazil, Chile, Peru, and Colombia, with projects underway in El Salvador and elsewhere, opening the way to becoming the first inter–national interest–free exchange system as a response to the World Trade Organization and the deleterious effects of debt–based global exchange. In 1997, a member of the French LETS returned to his homeland of Senegal to start a community currency system there. Today, the Doole (meaning “strength of unity”) is operating in many of Dakar’s districts, and in other communities in the country. A Cooperative Business where the system’s members can sell their goods, a School and Training Center where new skills can be learned in a guild manner, community projects and a weekly public market are the primary activities of the system. Doole currency, called “Bons”, are denominated in hours of time with a corresponding West African Franc and US Dollar value. 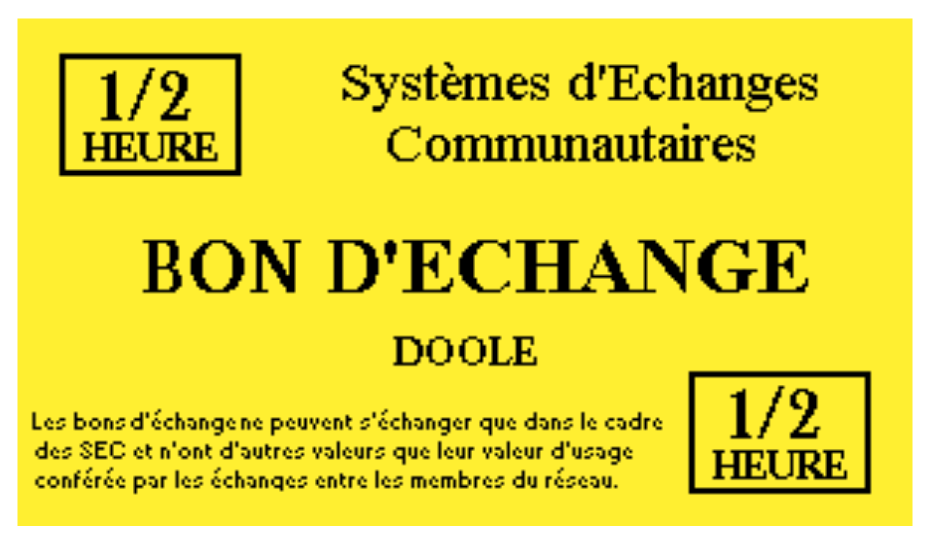 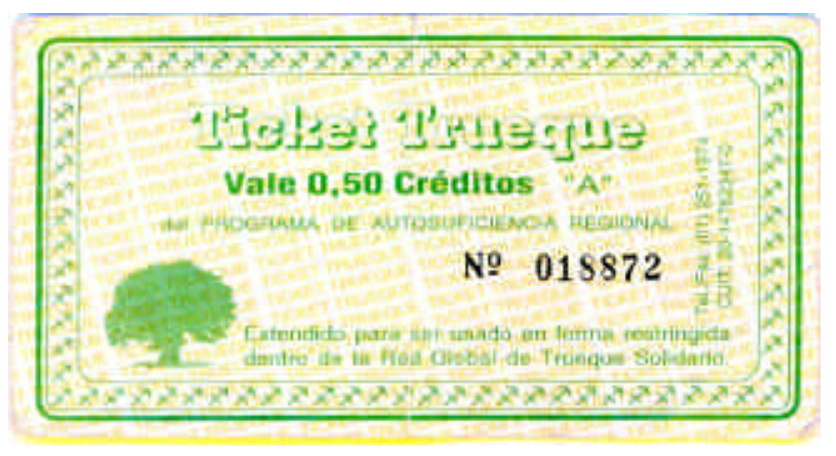